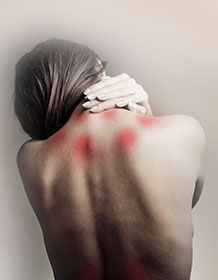 Fibromyalgia is a chronic disorder characterized by widespread musculoskeletal pain, fatigue and multiple tender points. These "tender points" refer to sensitivity that occurs in precise, localized areas, particularly in the neck, spine, shoulders and hips.  People with this syndrome may also experience sleep disturbances, morning stiffness, irritable bowel syndrome, anxiety and other symptoms.

According to the American College of Rheumatology, fibromyalgia affects 3 to 6 million Americans.  It primarily occurs in women of child bearing age, though men, children, and the elderly may also be affected.

According to recent studies, the number of diagnosed patients appears to be on the rise. This is a painful, frustrating syndrome leaving the person with numerous symptoms which remain difficult to diagnose by even a knowledgeable health care practitioner. Once diagnosed, the prognosis is vague at best, and most treatment protocols are less than adequate.

Currently, the exact cause of fibromyalgia is unknown, and because many of the symptoms mimic those of other diseases, it is very difficult to diagnose.

Although doctors are currently debating over the exact cause of Fibromyalgia, a myriad of theories exist as to its etiology. Gaining momentum is the theory that it derives from an oxygen metabolism dysfunction (Cutler, 2006). This theory posits that the symptoms of Fibromyalgia (fatigue, musculoskeletal pain, impaired lung function, memory impairment, etc.) are caused by the human body improperly processing oxygen, an element essential to creating energy and fueling body processes.

A second theory suggests that Fibromyalgia is a state of central sensitization. This condition implies that the central nervous system may be hypersensitive to pain (hyperalgesia), and this leads to increased sensitivity to certain sounds, vibrations, light, and other sensations (e.g., smells) (Starlanyl & Copeland, 2004). This pain may lead to the sleep disturbances seen in Fibromyalgia. Dr. Hugh Smythe conducted research to this effect in the 1970s (Moldofsky, Scarisbrick, England, and Smythe, 1975) and discovered that Fibromyalgia patients had disturbances in Stage 4 non-REM sleep that that disturbing Stage 4 sleep in normal patients induced Fibromyalgia symptoms.

A final biochemical theory suggests that Fibromyalgia exists because of elevated levels of a nerve chemical signal, called substance P, and nerve growth factor in the spinal fluid of fibromyalgia patients. The brain’s level of the neurotransmitter serotonin is also relatively low in patients with fibromyalgia. (Shiel, retrieved 2008).

Chiropractic care and Acupuncture have been found to be helpful in relieving pain in many cases of Fibromyalgia.

Hains, G, Hains, F., Combined ischemic compression of the spinal manipulation in the treatment of fibromyalgia: a preliminary estimate of dose and efficacy. Journal of Manipulative and Physiological Therapeutics, 23: 4, May 2000, pp 225-230.

Are you ready to start living a better life today?